Board diversity and the Public Sector Equality Duty: a guide for public authorities in Scotland 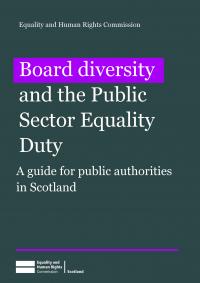 This guide is one of a series written by the Equality and Human Rights Commission to explain how public authorities can meet the requirements of the Equality Act 2010, which harmonises and replaces previous equalities legislation. The Act includes a public sector equality duty, which replaced the separate duties relating to race, disability and gender equality. The public sector equality duty came into force on 5 April 2011.

This guidance supports an amendment to the Equality Act 2010 (Specific Duties) (Scotland) Regulations introduced by the Scottish government in March 2016.

This new regulation aims to promote greater diversity amongst the members of the boards of Scotland’s public authorities.