Experiences of Migrant Workers in Fish and Food Processing in North-East and Central Scotland: A fact finding study 2015 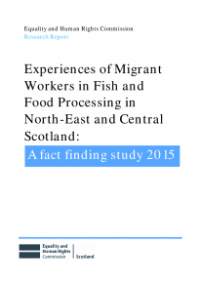 The study was prompted by an earlier (full scale) inquiry conducted by the EHRC into the Meat and Poultry Industries in England and Wales (EHRC March 2010). That earlier research revealed some areas of concern and the EHRC was able to make recommendations to the industry based on these areas of concern, as well as  areas of good practice revealed by that research (see table 1). Given the similarities of the sectors, the EHRC in Scotland wanted to take a look at the wider food processing and fish processing industry to explore any indications of similarities in employment and systemic practices.