A Lever for Change: Optional Protocol to the Convention on the Elimination of All Forms of Discrimination against Women 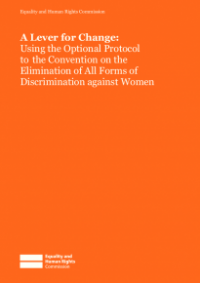 In the UK, international human rights conventions, such as CEDAW and its supplementary treaty, the Optional Protocol, can seem far removed from the daily realities of women’s and girls’ lives, especially as we have a range of domestic measures in place to promote and enforce equality between women and men. However, as women’s rights advocates in other countries have already shown, international conventions like CEDAW can offer very useful and practical tools for challenging discrimination against women and gender inequality.