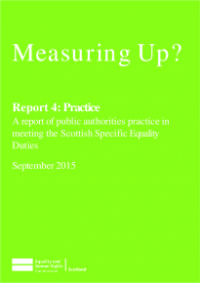 This report sets out some of the best examples we have seen, and identifies some of the common areas for improvement, in the performance of Scottish public bodies against their duties under the Equality Act 2010 (Specific Duties) (Scotland) Regulations 2012.  This report should be read alongside Measuring Up? Report 4: Performance. Both reports were published in September 2015.