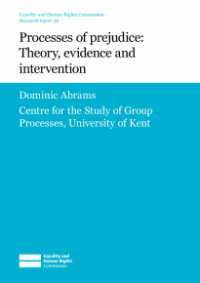 This report reviews current knowledge about prejudice: what it is, how it might be measured and how it might be reduced. It focuses specifically on the equality groups set out in the Equality Act 2006: groups which share a common attribute in respect of age, disability, gender, race, religion or belief, or sexual orientation.