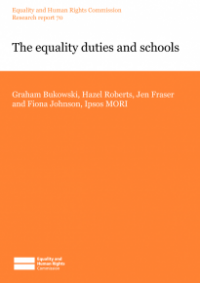 The Commission has launched a first of its kind report looking at the action taken by schools in England and Wales under the race, disability and gender equality duties, which were superseded on 5 April this year by the new Public Sector Equality Duty. The research which was carried out by Ipsos MORI, contains evidence from schools about the impact that the equality duties have had on improving pupil outcomes.