Researching and monitoring adolescence and sexual orientation: Asking the right questions, at the right time 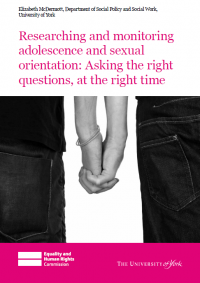 Evidence suggests that young people can experience disadvantage due to their sexual orientation, such as homophobic bullying, mental health issues, rejection from family and friends and increased risk of homelessness. The extent and impact of this disadvantage has not been systematically captured to date and constitutes a major evidence gap. Equally, the Equality Act 2010 has established a new Single Public Sector Equality Duty to promote equality, and provide protection for people of all ages from discrimination because of their sexual orientation. A first step in understanding how to capture such inequality is to review the evidence and explore the issues involved in researching and monitoring sexual orientation in adolescence – the focus of this paper